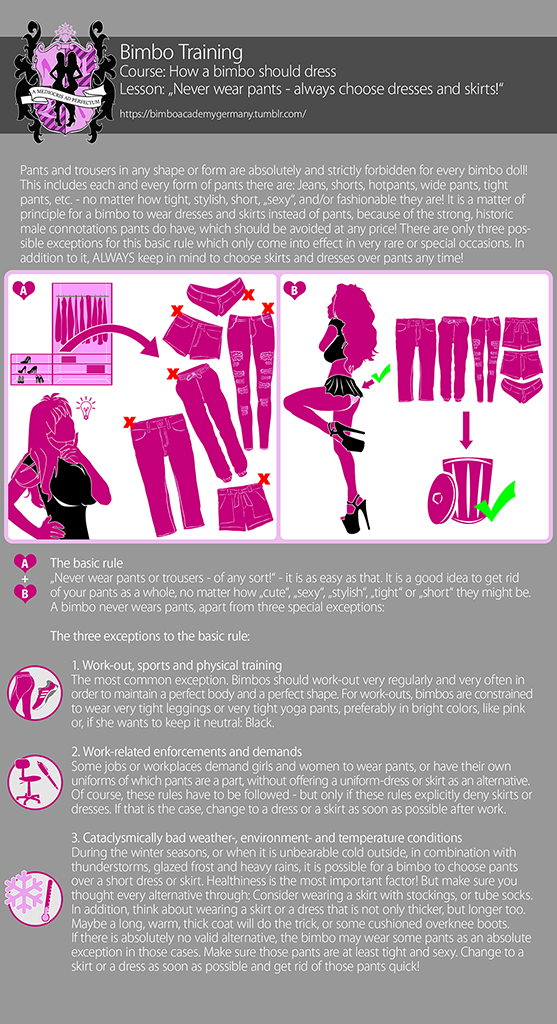 “Since the adoption of trousers in Western Europe in Late Antiquity, trousers have been largely worn by men and not by women until the early 20th century.“

I didn’t think I had to point it out in a very specific and basic bimbo rule for quite some time, especially because I mentioned it every now and then in my articles, but boy, was I wrong, so here it is: Bimbos shouldn’t wear pants – Never! – Wear skirts and dresses instead! This rule goes out to all the bimbo trainees and girls who think wearing some tight pants or fashionable trousers looks cool and sexy and is compatible with the bimbo culture, just because they are tight, pink or revealing – well, guess what: IT’S NOT! But likewise, this rule goes out to many, many bimbo trainers and lovers who think some tight, short hotpants or some tight yogapants are not only acceptable and sexy, but even something preferable or commendable – guess what: IT’S NOT! Regarding how many of you guys keep messaging and asking me about yoga pants, hot-pants and leggings, and regarding how many, even very established bimbo dolls and rolemodels, do post pictures in which they pose in some kind of shorts or cut up jeans, I very much know how unpopular my opinion is and how severly I will unpopularize myself with posting this rule – but I’m kinda okay with that in order to propagate the -true- bimbo spirit! Of course, there isn’t any reason at all why you should obey my rules, and there isn’t some kind of diktat, forcing you to see things like I do, no matter if you are a bimbo trainee or a bimbo lover, but please give me the chance to convince you.

December 29, 1852: Emma Snodgrass is arrested in Boston for wearing pants. This incident was one of the first conflicts of these kinds, which continued to happen until the 1970s in most modern countries – something not to be proud of, regarding the reasons why Emma Snodgrass decided to wear pants instead of a nice dress: The reason for her wasn’t fashion related or because she did like the look – it was very much political by any regards. Emma fought for womens rights, more specific, the right for women to vote. While I hope we all can agree on the fact that women and men should all have the same rights and opportunities, we have to understand the symbolic nature of Emmas choice: She picked some pants, as a symbol of masculinity – something very understandable in that situation, trousers were regarded as an iconic and specific male component – something a girl shouldn’t lay her hands on. The general, social classification of pants being something male and skirts and dresses being something female, still exists today and did exists for centuries, a fact you just can’t argue with. But nowadays, times have changed, and it is (luckily) no longer necessary for girls to wear pants in order to make a political statement, a claim you don’t have to agree on – but then you should think about making another choice regarding bimbofication as a lifestyle-model anyways. Bimbo girls claim their rights and opportunities, but don’t feel the need to wear something that is still strongly regarded as “masculine”, but instead proudly embrace everything that is regarded as feminine and use it to express their nature and rights in a strong and proud way. You don’t have to become male in order to take what is rightfully yours (at least not today).

“The de-feminising effect of trousers on the younger generation is unedifying. Young girls of today have, for the most part, worn trousers most of their life, and as a result they tend to behave like boys. It is little wonder that they feel uncomfortable in dresses (…)“

(- Dr. Carol Byrne, “SKIRTING THE DIFFERENCE: What’s wrong with women wearing trousers) [Attention: Apart from this quote I don’t share ANY ideas or opinions with the author!]

What is more feminine?

Being a bimbo is about being as feminine as possible. We already stated, that skirts and dresses are generally regarded as feminine, while pants have a strong male connotation. While bimbo dolls theoretically do have the possibility to wear pants, they should refuse those options. As a bimbo doll, you do want to be regarded in the most feminine and girly way possible, you don’t want any male aspects or factors adhering to your persona! Know the symbolism and act like a bimbo doll should, otherwise you won’t be able to create a picture of perfect and flawless femininity.

“Don’t want to be feminine? Want to wear pants? Fine – just don’t try to be a bimbo!”

Let’s face it, pants are just damn impractical when it comes to another aspect that is really important regarding bimbo dolls: Sex. Bimbo dolls are perhaps the most self-determined and enlightened girls there are in these terms. Always open for fun and adventures, nonchalant and focused on sexual fulfillment, fun and accomplishment. Nobody knows, when there is the next opportunity for a bimbo girl to have some fun, so it is a good thing about skirts and dresses let you be flexibel and spontaneous! Wearing something that seals the complete lower part of the body and makes it impossible to access that area easily, isn’t very bimbo-like and makes having unprompted sex very complicated and  unerotic: Opening the pants, undressing them, pulling them over your heels… no… thank you. In addition, in terms of aesthetics: While some pants HAVE to be undressed for sex, a skirt or a dress may be kept on! Something very, very tempting for some outfits, or even costumes, like the bimbo schoolgirl…

Be honest: Don’t you feel much more sexy when wearing a skirt or a dress? See? That’s what it’s all about…

A bimbo doll is a girl with body and soul – the most feminine, proud and sexy girl you can imagine! And as such, she dresses like one with ease, fun, conscientiousness and pride!

One thought on “Bimbo training – “How a bimbo should dress: Never wear pants – always choose dresses and skirts””