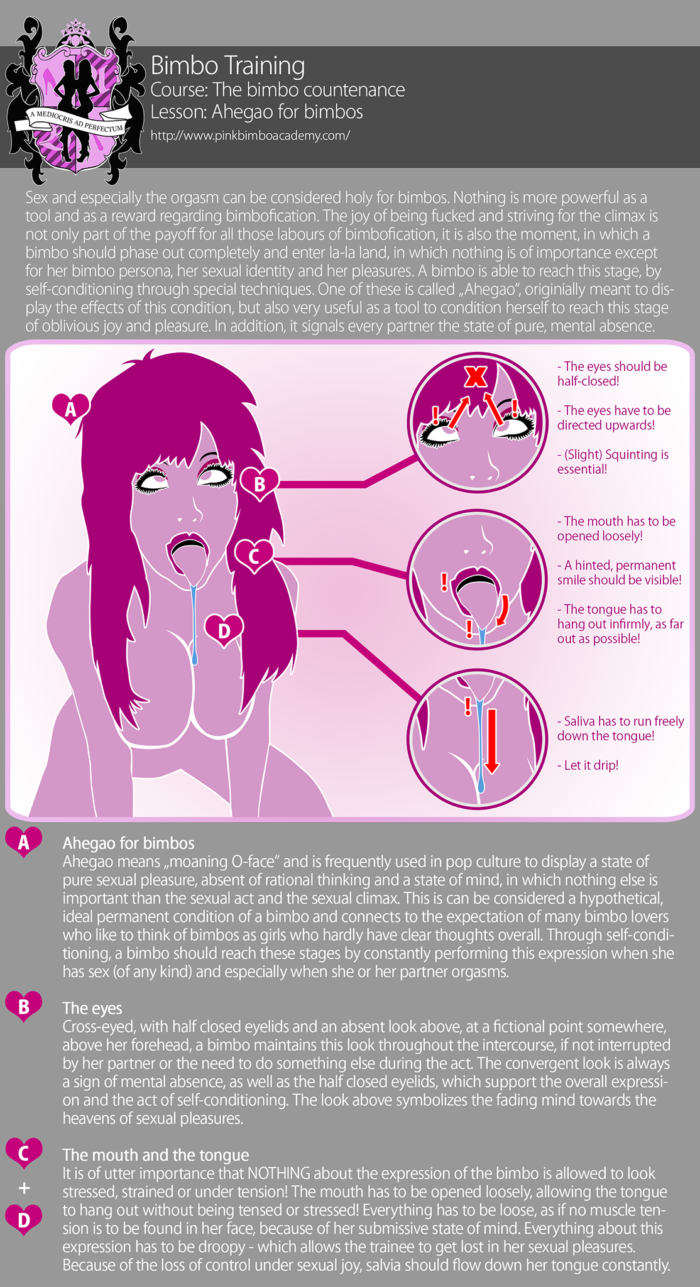 Happy Easter guys! You know what? Because of this occasion and the fact, that the PBA website had it’s first anniversary just a few days ago, I decided to give a present to all of you! This lesson is available for everyone in high resolution, something usually reserved for my supporters on Patreon. Also my patrons will get a special present, which still takes some time – so everybody can be happy and I have the satisfaction of giving something to the whole community. Satisfaction is also the topic of this lesson post, but let us deal with the backgrounds first:

Between 2018 and 2019 a trend, yes, a fully grown, viral storm raved through social media (does someone remember this stupid bullshit? Yes, nearly related regarding popularity), especially through cosplay- and anime-communities, but bimbo related places where also affected: The “new thing” was called “Ahegao” and thousands of girls participated. “Ahegao” (あへがお) is a term of Japanese pornography, meaning “face” (-kao/-gao) and an onomatopoeic rendering of moaning (aheahe-/ahe-), which would literally translate into “strange moaning-face” – but with an onomatopoetic touch. More easily, people tend to call it “O-face”, despite the fact, that at no time the letter “O” has any meaning for this expression. The origins of this expression can be traced back to the early 1990s, since when this terms was used to describe the facial expression of girls in hentai- mangas and animes during orgasm. Before we come to describing what this expression looks like, it is important to mention, that it can indeed be performed by a real human being, although it orinigated from drawn figures. As I already mentioned, this was extensively done by thousands of girls on social media (f.e. bimbo cosplay rolemodel Jessica Nigri also participated), although I can’t find an explanation for the sudden increase in popularity and how and why it went viral. Fact is: Still many girls use this expression as a standard countenance for their pictures and it is still VERY popular amongst many (cosplaying-) camgirls and porn-actresses. Now, let us talk about the mien itself, how it is achieved, why it is a very welcomed phenomenon, what it has to do with bimbofication and what the benefits for bimbos are – and why every bimbo should practice Ahegao and use it as a standard expression while having sex or at least when she is about to orgasm (or her partner).

“Typical characteristics are rolled eyes, a hanging tongue and blushed cheeks, and sometimes star or heart pupils. The character’s faces are drawn deformed in Ahegao scenes. Depictions of Ahegao are often drawn intentionally exaggerated to create a surreal effect. The Ahegao face is used to depict different grades of sexual arousal, whether in a consensual context or more often otherwise.” – “Ahegao” on Wikipedia

“It’s a realy wierd japanese/chinese/korean involving mostly with anime or manga of an orgasm facial expression. A VERY STUPID ORGASM FACE. They basically have their eyes roll back, tongue out and a very stupid face when they orgasm. It’s almost like an eye roll orgasm but with more dummy face involved. It also similar to an eye roll orgasm, since AHEGAO involves eye rolling orgasm and latley camsluts from FreeBestCams.net, chaturbate and MFC have been putting vibrating panties and make people tip and they start shaking like a demon possession, doing eye roll orgasms and ahegao type orgasms for more money and yes, it’s a turn on.” – On the urbandictionary by Eye Roll Orgasm.

1) The eyelids have to be half closed (read the lesson about the basic facial expression for bimbos, keyword: bedroom eyes!), a slightly convergent look has to be maintained, with an absent expression directed above, at a fictitious point above the bimbos forehead.

2) The mouth has to be opened loosely, with the tongue hanging out in a completely unstressed and droopy manner. Salvia shoud flow from the tip of the tongue constantly and isn’t to be held up as a result of the completely relaxed, submissive and absent state of the bimbo.

So, now, that we defined how Ahegao for bimbos has to look like and what a bimbo has to do in order to achieve this special expression, let me explain WHY a bimbo should adapt this technique, use it frequently and WHY we defined it this way at all:

There is a reason why Ahegao was invented as a special expression of girls who are about to orgasm in hentai and this reason is not only absolutely comprehensible and valid, but also provides us with a general understanding of how many men expect a girl to approach her own sexual pleasures: “Oblivion” in terms of an aware unconsciousness would be the keyword here. Every aspect of the Ahegao mien aims at illustrating the absolute absence of rational thinking, logical thoughts and temperamentally restrictions and reflections: The twisted eyes, the absentminded look above, the loosely opened mouth, the anemic hanging tongue and the uncontrolled salivation – Everything reminds us of a person really out of it. Of course, the meta-thought behind this representation, is the idea, that the girl in question reached this state purely and solely because of overwhelming sexual pleasure and uncontrollable reactions of her body because of her orgasm. This gets backed up, by the fact, that most of the earliest renditions of the Ahegao expressions were in fact used in “rape hentais”, in which “Sailor Moon-esque” magical girls got raped by antagonistic demons or aliens (yes, the infamous tentacle porn), which didn’t only force the protagonists to have unprotected sex against their will (see above), but often also culminated in impregnating the magical girl, pumping her full of substances until her belly seemed to contain dozens of junior-demons/aliens. In most cases, the raped heroine does……… nothing about it at that point: Maintaining the Ahegao expression, rushing from orgasm to orgasm, trapped in a world of ongoing sexual pleasures and unimagined, sexual fulfillment, the girl scrapped any rational thought about her situation, the implications and the repercussions – only focused on her next climax, absent to the world and absolutely lackadaisical towards anything else that doesn’t have something to do with her sexuality and joy. The girl is neither willing nor able to control her salivation, animated to flow because of her getting fucked, just to be able to take another phallus in her mouth, with her gaze directed to the heavens. Every connoisseurs of the bimbo culture will already have discovered multiple overlaps with these ideas and some general bimbofication goals – but for everyone who didn’t spot everything, let us gather the overlappings, and by that, the benefits of Ahegao for bimbos:

1) Although many of you guys already know, that I don’t think that it is necessary for a bimbo to be stupid or “brainless”. But undeniably, there is huge section in the bimbo community that assigns great value to this idea. I can’t help myself, but to connect the general idea of Ahegao with the expectation of these bimbo-lovers: A girl without the ability to make rational decisions, to weigh consequences and without the need to think further than her next climax – a feminine creature, purely reduced to her sexual pleasures and the sexual pleasures she gives to others. Yes, this idea has something to be said for it (although I find it not only impractical and escapist, but also dangerous and unrealistic if we are talking about an incessant condition) – and Ahegao does take up these thoughts. A bimbo performing this expression while having sex, has to be the epitome of these definitions of bimbofication: “No brain, just tits, no thoughts, just fucking” – as many of you guys would say. This strongly connects with the idea of “brainwashing” as a part of bimbofication! In addition, this state implies a complete riddance of responsibility: A bimbo in this condition abandons all responsibleness, and is just free to enjoy her sexuality.

2) As we already stated, a bimbo is a sexual creature. This is one of the three pillars of bimbofication. The ability to give herself up for the sake of sexual pleasures, to lose herself in a world of sex and fucking, enjoying it as much as humanly possible. This is a goal every bimbo should strive for – and more or less the constant state a bimbo should go after. Sex is the most important thing there is! By performing Ahegao regularly and often – a trainee is able to reach this condition through self-conditioning. This will not only focus her mind even more on her goal to get fucked, but it will increase her possibility to lose herself in joy and by that increase the amount of pleasure itself. In addition, the sight of a bimbo performing Ahegao, assures a man in his efforts to bring her such pleasures and is overall a really hot spectacle – and therefore a must do for every bimbo doll out there (f.e. some commenters called Purple Bitchs rendition of Bowsette performing Ahegao “the most beautiful clip they’ve ever seen in their life”).

3) Ahegao introduces MANY young girls to a world of sex-focused principles, femininity, objectification and likely to bimbofication. I already said, that MANY young cosplaying girls participated in the “Ahegao challenge” – and many of those continued to go on, performed in front of webcams, in amateur videos and finally introduced themselves as camgirls or continued to sexualize their cosplay even more, with shorter skirts, high heels, lower cut necklines, hotter postures, eventually showcasing more and more nacked skin. This is the perfect groundwork for bimbofication! Young girls who get desensitized towards explicit, sexual behaviour, normalizing a self-objectifying mindset, will become VERY welcomed and fine bimbo trainees.

So, now you should see the direct benefits of Ahegao for bimbos, and by now, you should have understood, why it should be performed in that way, often and regularly. But in the end, I want to add another reason, why bimbos should pay close attention to every detail I described, because many girls tend to behave in a “non-bimbo-acceptable-way” when they perform the Ahegao expression. I stated that the general expression has to be unstressed, droopy and without any tension, especially talking about the mouth and the tongue. This is of course because of the overall “absent” look/state we want to achieve, but there is also another reason: A bimbo forcefully poking her tongue out at her partner/trainer/master, could easily be considered an insult. A bimbo MUST NOT poke her tongue out at the person fucking her! NEVER! Keep that in mind and let your tongue hang out absolutely droopily! Perform this expression often, if not always when you are about to orgasm, perform self-conditioning to reach the desired state of mind and try to perfect your Ahegao in a bimbo suitable manner. A good girl does this!

If you are further interested in this topic, I refer you to two dedicated subreddits, with many awesome examples and more information: r/AhegaoGirls & r/Ahegao_IRL.