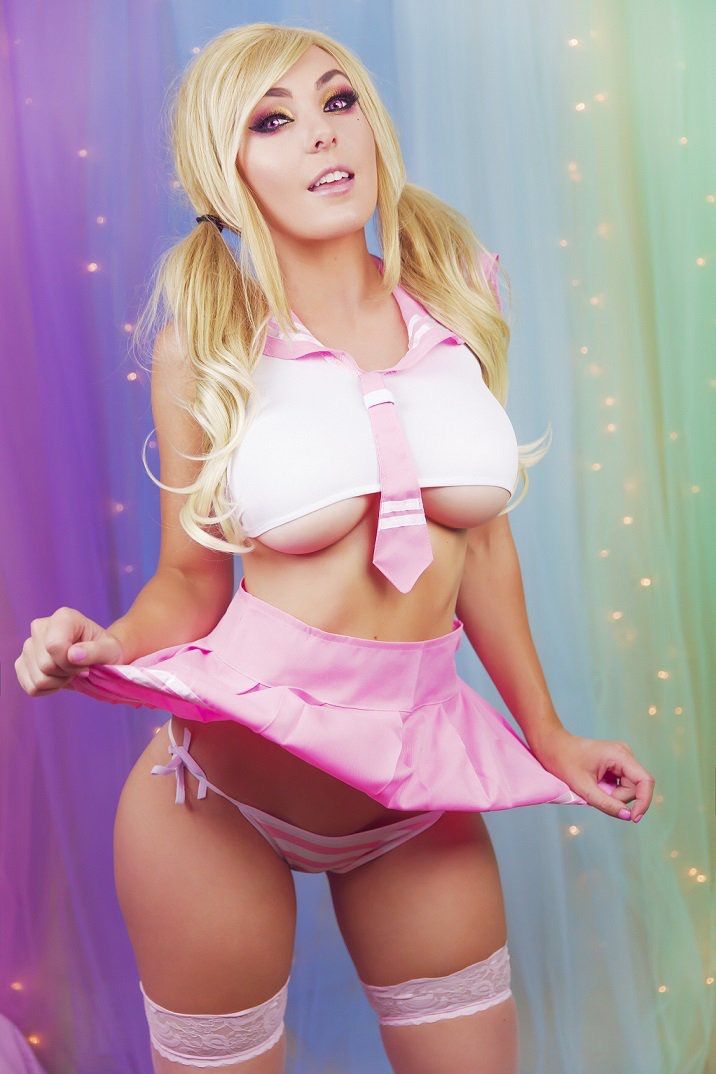 After the second part of our bimbo cosplay mini series, it is time for our first suitable rolemodel, and I know you all knew about who this would be. It is always a good sign, when pictures of a cosplaying girl are not only frequently posted in cosplay-communities (like in some of the usual subreddits), but also in several online bimbo communities – an indicator that she seems to be on the right track, and you can see her pictures all over the bimbo scene. Are there cosplaying girls – or even real, cosplaying bimbos with bigger tits or more enhanced tits, showing more skin, having a more feminine and sexy atittude or style, pursuing the bimbo lifestyle in a more dedicated and proclaimed manner? Yes – absolutely – and we will talk about those girls in the near future, but I think it is only appropriate to start with the undisputed figurehead of the cosplay community. Gather around and let me tell you the tale of the queen of cosplay, the story of the uncontested rolemodel and paragon for all cosplaying girls – the tale of queen Jessica Nigri, the girl who managed to establish a whole new world of dressing as your favorite, fictitious character, make a living out of it, become famous and an internet star (and even get your own documentary). The girl who lifted cosplay to a new level, brought it into the light of day for many young girls, established “sexy cosplay” where before, it always seemed to be a hobby for ugly, nerdy girls and plain Janes who tried to draw attention from undemanding geeks und basement dwellers (not always without criticism, hate or rejection).

Young Jessica Nigri became an internet phenomenon literally over night, after her rather unimposing cosplay of “Sexy Pikachu” went viral and broke the internet in 2009. The more or less accidental snapshot of her, wearing her first costume to San Diego Comic-Con International gathered world wide attention and made her instantaneously famous – typifying the wet dream of every nerdy gamer, Pokémon fan and perhaps most other men too. Not without a reason, apart from the many benefits of sexy girls in costumes we already spoke about, young Jessica was unlike all the other girls many people had seen on such events: Beautiful, sexy, blonde, feminine, cute, with a charming smile and a perfectly shaped body, wearing a saucy breath of nothing remotely resembling the yellow mascot of the popular Nintendo franchise. After that, her career skyrocketed through the roof, with her becoming an official spokesmodel for several video games and comic books, including Lollipop Chainsaw (of which her pictures also became famous). Jessica built an empire on the base of those “Sexy Pickachu” pictures, earning staggering amounts of cash with her new profession: Professional, sexy cosplay. Nowadays, Jessica is a celebrity, Youtuber, model and voice actress, with a cult-like (sometimes toxic) followership that worships her like the Second Coming of Christ. If you are interested in a more detailed summary of her story, there is much more to be found about that – but we will deal with her in regards of bimbo related aspects and the benefits of her cosplay for the bimbofication community, so let’s have a look at her first – and talk about a rather ugly controversy in addition:

Jessica is a beauty – there is no doubt about that. What a stunning, beautiful, sweet and sexy appeal! Wonderful, long, bright, blonde hair, a beautiful face to die for, with a shape and expression every boy dreams of. It is not hard to imagine, that Jessica always was the school beauty, the “down-to-earth-next-door-girl” with that naturalness and that sweet charisma – in short – the girl everybody wanted to date. Yes, nature truely blessed her and she will never have to walk through those difficult, hard, energy- and time consuming procedures, like most other girls have to in order to be the most beautiful girl in the room or that one babe to which every man turns his head around – she just has it. But it takes more to be a bimbo princess than natural beauty, doesn’t it? Of course – and we will speak about that and her bimbo potential – but let us first examine her further: Although Jessica seemed to have gained a little bit of weight over the years, since her first appearance, it is still very safe to say, that she has a nearly perectly shaped body, with a flat belly, a super sexy ass, wonderful legs and a stunning overall appearance, with that additional weight easily being discraded as “baby fat” by most people (nature also blessed her with fantastic conjunctive tissue it seems). Although many of you might be absolutely unimpressed by the size of her tits, Jessica has a fairly big rack – of course, absolutely NOT sufficient for a bimbo doll – and yes – she should absolutely go FAR FAR bigger – but speaking of a “not-self-proclaimed-bimbo”, her rack isn’t that bad. And this is where the beforementioned controversy starts: By now, it is virtually proven that Jessica did enhace her tits with some (sadly small) implants. I don’t say this as something bad (hell no! Quite the contrary!!!), but it has to be mentioned, because Jessica, in a VERY bimbo-unsuitable manner, is in constant denial of this fact. There are many pictures of her, showcasing an inexplicable growth of her tits over time, an uncovering of the “push up lie”, a very early Facebook post of her, calling her fans to action desperately to buy posters of her in order to finance her implants (This is VERY bimbo suitable!) and – the internet doing its thing – a picture where clever anons spotted a just typical as suspicious scar underneath her armpit (explanation: See here!). This story is as sad as it is ugly: While there actually seem to be people judging her for having implants (I really hope these people burn in hell… for all eternity. We have to get rid of this vermin. Jealous, boring, ugly normal girls and fat “nerd-witches”, insecure liars and losers) Nigri herself doesn’t exactly cover herself with glory here: Instead of being proud of some enhanced tits, shouting it from the rooftops, showcasing her modified rack and being plastic positive – like a good bimbo handles it, she is in constant denial, disputes and suppresses every mentioning of it. This is NOT how a bimbo should think! Be proud! I guess she is following that strategy, because she wants to maintain that “naturalness” and “natural beauty” appeal we talked about before, because she has the feeling that these aspects are her big selling points. Of course, as much as nature may have blessed her, this is nothing but a nauseating lie and in bimbo culture considered a dick move. At least in this case, she shouldn’t be a rolemodel for ANY girl, especially not for bimbo girls. Bimbos: Be PROUD of your enhanced tits and your implants! And don’t tell me these look “natural” to you…

So what else is there… many more controversies you say? Yes, of course – let us briefly look at those before we come to the positive facettes of this doll: As big as her followership may be (can I have as many patrons on patreon as she has pls?Kthanxbye!), there is an almost equally big community of “Nigri-haters” in the cosplay scene. Of course, most of these haters consist of beforementioned woke nerd-girls, fat cosplay-amateurs, ugly Plane-Janes and begrudgers, who blame Jessica for not only commercializing the cosplay-hobby (Jessica does employ a whole staff of professional costume manufacturers, prop builders, photographers, designers, make up artists, etc.) but also for sexualising it. Both accusations, we – as bimbo lovers and bimbofication fans, can not only live with, but should even approve of: The professional assembly and design of her costumes does look accordingly amazing. A cosplaying bimbo should never wear cheap, pathetic or inadequate costumes, but only high quality, valuable and spectacular ones! Nigri does exactly that. Your costumes should be able to be used in a AAA+ movie! Furthermore, her professionally taken pictures are also a prime example for every bimbo: There is little to no use in producing one million badly lit selfies of poor quality! Bimbos should absolutely participate in professional, high quality photo shootings, like Jessia does – no matter if they are cosplaying or not. The sexualising of the cosplay practice is absolutely welcomed and we have to thank Jessica for that! Already, hundreds, if not thousands of pretty, sexy and bimbo-like girls started their careers as sexy cosplayers, exploring their bimbo potential and progressing the scene even further! We, as bimbofication fans, have no use for boring, unfeminine, ugly and unsexy costumes, girls and clothes! As the pressure increases by those sexy cosplay-girls and cosplaying bimbos, ugly nerd girls will get no more attention and either vanish or buckle up to become bimbos themselves – exactly like it should be! Costumes will get even more sexy and revealing, and even more girls will follow along. Jessica is a rolemodel in popular culture for many, very young girls, who otherwise would never have thought about wearing revealing clothes, sexy costumes, high heels, very short skirts revealing their asses, stockings and doing everything they can to get such a perfect body and appeal. In this way, Jessica is like German bimbo rolemodel Katja Krasavice, a guiding light for future generations of girls and female fans of popcultural media. But is she also a real bimbo doll? Well – she would never admit that (altough she often absolutely willingly and knowingly coquets and plays with the bimbo appeal and style!), but yes, she absolutely is. Jessica isn’t shy about showcasing her body, her sexappeal, her tits, her ass, her legs, drawing attention and earning money with that. Of course it takes much more, but we already talked about her enhanced tits, her blonde hair, her stunning beauty, her fantastic body and her feminine grace. Her costumes solely aim at generating sexual tension, always showcasing her assets, letting her look as feminine, beautiful and sexy as possible. So yes, we absolutely can say that Jessica Nigri is a suitable rolemodel for cosplaying bimbos, girls, bimbo trainees and female cosplayers… with some reservations (plastic and bimbo negative attitude, and far too small tits and lips!). However, look at her pictures! THIS is how you should cosplay, bimbo trainees and girls! This is how it is supposed to look! No matter if you want to exploit the cosplay culture and make a living out of it, if you want to draw attention or if you want to make some men very, very happy in the bedroom – do it like she does, and go for these looks! Cosplay can’t look better!

…and yeah… as you may have noticed, I couldn’t decide on 5 pictures from her to chose from… so… here are more… That’s what you get when your pictures are so amazingly well made…