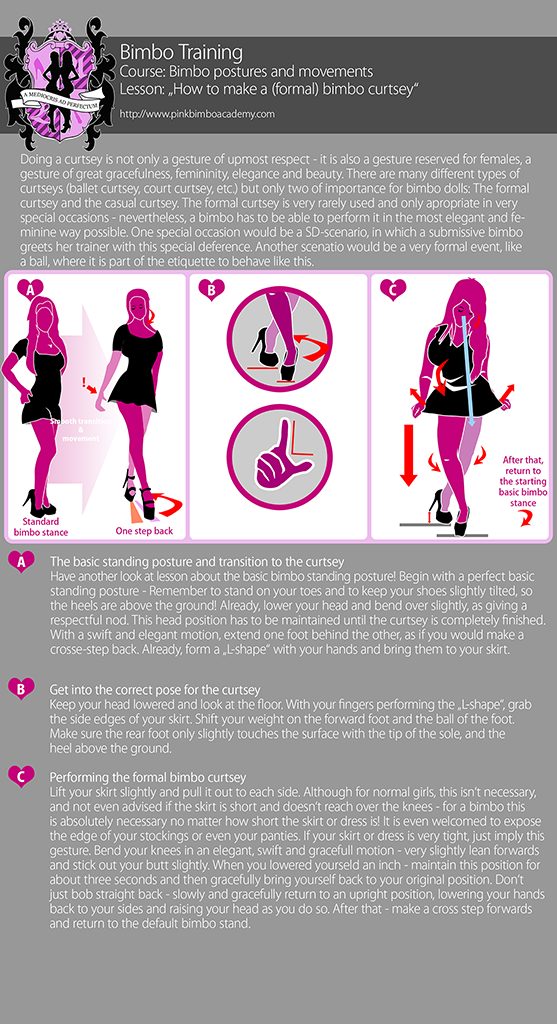 Bimbo training – How a bimbo should stand: “The basic standing posture”

Bimbo training – “How a bimbo should walk: Basics of walking”

Happy Easter, everyone! Hope you are alright and everything is fine – even in these complicated times. So, what can I do to make times a little less boring or bad for you guys? Well, I thought to myself, how about some “classic content”? Remember, when we started the whole lesson paper thing, back then, with the first lessons about sitting and standing? Okay – and because it is Easter, I give you not one, but two lesson papers – I hope you have fun with this! With the topic we are covering today, there is even a small connection to the inevitable bimbo Easter-bunny stuff, because it gives me the opportunity to refer you to our “Bunny lessons”, in which we talked about the different moves, a bimbo dressed as a bunny has to be able to perform. The “Bunny greeting” is more or less the Playboy Bunny equivalent of what we are talking about today – a proper, traditional gesture of greeting for a bimbo. BUT: Remember – if you, as a bimbo, happen to wear a bunny costume – the bunny moves do apply and you are NOT allowed to do what we are talking about today! In every other situation, go along with todays lesson…

The curtsey is vicarious for so many problems we have in our society nowadays, and for many of the elements proper bimbofication is fighting for: It is nothing more, than a traditional gesture of greeting in a respectful and sophisticated way, or as traditional gesture of an inferior to a superior. However, this classic, long-standing form of behavior has become VERY rare and is even replaced by the male equivalent, the male bowing or genuflecting performend by females – without ANY reason. Once again, this is a case of females, adapting to masculine traditions and behaviour with no rationale what so ever! You have me heard ranting about this unacceptable evolution of a sick society here many times before, but this is another case in which it becomes very clear what I mean: It is not like the curtsey is a dedicated gesture of oppression of the female sex like no other – it is in fact EXACTLY the same as the male counterparts, the beforementioned male bowing or the act of genuflecting – just with its own sexual identity! Curtseying is in no way better or worse than bowing as a male – it is just DIFFERENT – each complementing another sex, without any judging. THERE IS SIMPLY NO REASON FOR FEMALES TO ADOPT THE MALE BEHAVIOR! How about instead, valuing and appreciating the traditions of YOUR own sex – instead of acquiring the traditions of the other side, which are in no way better?! This alone is a reason for the forces of bimbofication to protect, propagate and cherish these traditions! Bimbofication is about hyper-femininity – the merits of everything we regard as “female” and “feminine”, so every bimbo should own up to these traditions!

Of course, there are many more reasons for us to establish these lessons today: Many times, I said, that a bimbo is “NOT a dockside whore”, “NOT a contruction worker” and “NOT the hick girl next door”! A bimbo is a creature of elegance, style, classiness, feminine grace and sexappeal. With the ability to perfom this strictly female gesture, a bimbo does not only own up to traditional femininity, she also gives proof of her feminine sophistication and a certain level of classiness. The curtsey itself, is a procedure of movements, FAR more elegant, swift and appealing, in comparison to the male counterparts, which are rather choppy, stiff and very “male in nature” – rendering this gesture predestined for the elegant, light-footed and tender sex: It looks WAY better, seeing a girl gracefully curtsey compared to someone bowing! A movement of elegance, delicateness and dainty, feminine grace – this is what we are talking about. In addition: Curtseying does only really work wearing a skirt or dress – another reason why we should support this behaviour, having in mind, that a good bimbo NEVER wears pants or trousers (unline all the tacky “normal girls” out there…)! By doing a curtsey, a bimbo showcases her femininity in an elegant way that is not only very pleasing to the eye – but may also contain a certain level of sexual appeal in addition.

But why do we have two papers today? Let me explain: While there are many different versions of the curtsey – only two of them are really interesting for a common bimbo: The formal curtsey and the casual curtsey (which every girl out there may have done already multiple times in her life by accident):

This is, more or less, the “classic curtsey”. The bimbo version, does alter a little bit from the established form, but is overall the same. How it is done is explained in the lesson paper above, but when should a bimbo do this? It is not very likely that the common bimbo will have an audience with Her Majesty, the Queen of England (in that case – really, don’t lift up your skirt if it doesn’t reach over your knees… but this is more or less the only exception…) – but there are some other scenarios in which a bimbo should be able to perform this, which is why EVERY bimbo should learn it. Let us talk about two possible situations:

High society bimbo dolls may encounter special events, like a ball, where it is very common and expected of debutantes to be able to perform a curtsey PERFECTLY. Of course, this is more or less the type of event mostly “bimbo princess archetypes” participate in – but even “normal” bimbo dolls may find themselves in situations, where they should be able to curtsey, even if it is not so strictly demanded or austerely regarded by everyone present. An example could be a common, upscale dance party or a wedding.

Another example would be dedicated bimbo training with a sophisticated bimbo trainer: Again, this might be a special case for another bimbo archetype, this time, we are talking about “the bimbo slave” but it also may be interesting for every other bimbo when we think about “bedroom training”, submissive behaviour in a DS-relationship, some BDSM fun or just some common roleplaying. Let me put it this way: I, as a dominant bimbo trainer, would expect my bimbo trainee, dressed up in a proper bimbo maid outfit, to curtsey PERFECTLY when she enters the room or addresses me in any matter. Within this scenario, it is about the traditional value of the gesture of an inferior to a superior. The trainer is the superior of the submissive bimbo trainee – which makes it absolutely necessary for the trainee to greet her trainer/master/partner in a suitable manner. The curtsey is perfectly suitable for this, because it does possess these traiditonal values, as well does it express the feminine, submissive, sexy, elegant charm one would expect from a proper bimbo trainee. And don’t forget: The submissive curtsey is also expected when the trainee leaves, after she got her instructions…

In case you want a very basic training video – go with this one, until Jessy gets to it 😉

This is something every girl has done – maybe not with intention, maybe in an ironic way or maybe out of pure joy: The casual bimbo curtsey is not a “real curtsey” per se – it is more of an very “girlish”, cute and sweet expression of happiness, which is exactly why every bimbo should do it as often as possible. Some girls do it when they receive a compliment about their outfit, some do it because they are overwhelmed with joy in a very happy moment, but nevertheless, it is always eye-candy for every observer. This expression of the female body, is one of THE bimbo movements in general! Don’t believe me? Well, how about a “Married with children” marathon? You will see one of THE famous, feminine, sexy and stunning bimbo rolemodels of all time, the amazing Kelly Bundy, doing this CONSTANTLY – no matter if she introduces herself at a model competition or if she receives some praise after she did/said something right. And this goes without saying: If Kelly Bundy does it – it is mandatory for every bimbo to do the same. She isn’t one of the defining epitomes of bimbokind without a reason (which is why we will talk about her soon…)!

So, have some nice days, stay tuned for more content… and to all the girls out there: LEARN THIS! Learn how to perform both forms of the bimbo curtsey! No exceptions, no excuses! To all trainers: DEMAND your girls to learn this… and make use of it… and if it is only in the bedroom, letting your bimbo maid showcase her dedication before you reward her…