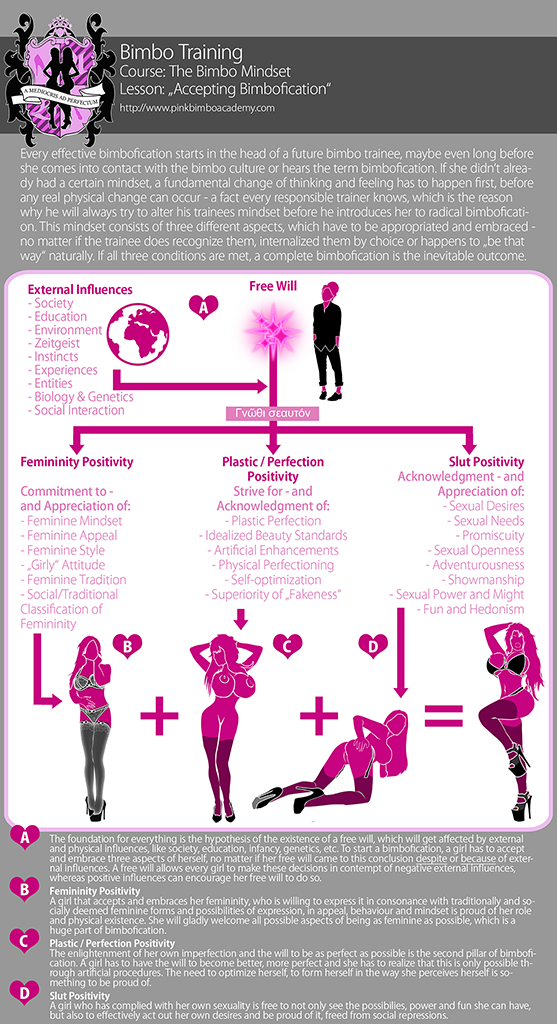 Many of you asked me about “more beginner stuff”, “help for early bimbo trainees” or “low level steps for girls who just discovered their interest for the bimbofication topic” – so I decided to go to the beginning and cover some of the very early stages of bimbofication, the first things that are most likely to happen once a girl thinks about this whole topic, some of the demands that should be met before something else can happen and the very first things a girl can do in order to start her journey. So, this time, we’re going to have a look at the absolute bare minimum that has to occur before a girl becomes a bimbo doll. The whole journey always starts in the head of the trainee – even if she doesn’t realize it and even if she doesn’t know anything about bimbofication and her future as a bimbo doll is just a mere, wishful thinking in the head of her partner/trainer.

We are assuming the existence of free will – even if this is a subject of heated discussion from a wide variety of angles between different philosophers, neuro-scientists, biologists and sociologists, and always has been – for hundreds, if not thousands of years. There are many historical geniuses, who didn’t believe in the concept of free will, like Arthur Schopenhauer (“Man can do what he wills, but he cannot will what he wills“) and many more, but we won’t deal with the teachings of the determinists or religious beliefs of fate and divine predetermination, because, frankly, there would be only two conclusions we could make: 1. Some girls are just destined to become bimbo dolls, some are not – and this will happen either way and there is nothing we can do to change these fates (in which case, also our endeavours are foregone and have to happen – with a preordained outcome, so no-one’s “free”), or 2. The decision to become a bimbo doll depends solely on external influences, leading to inevitable chainreactions that do influence a girl to make those decisions, forming her will without any freedom. In this case, we are slaves to our own genetic program and all those external influences, like education, instincts, social interaction and so on, without the possibility to make decisions detached from these factors. If this is true, there absolutely has to be an effect of our constant efforts to propagate the bimbofication ideals, a “re-programming” of girls towards the decision to become bimbos – something they can’t do anything about, the more influence our ideals gain in society, which also means that we should strengthen our efforts. No matter what, for this lesson, we are assuming, that every girl possess a free will, which is influenced by those external factors, leading to the decisions she makes. You didn’t expect a bimbofication blog to solve the fundamental questions about free will, didn’t you? Oh, well… maybe next time…

“Accepting bimbofication” can either happen with awareness, but also without it, no matter what, there have to be met three conditions:

A girl who accepts all three conditions, whether consciously or not can become a bimbo doll, or did already become one – it is just the logical conclusion of the acceptance of these factors. Without accepting these three conditions, the outcome couldn’t be considered a bimbo, because any of these three factors contains elemental parts of what makes a bimbo a bimbo. Every trainer who realized this, won’t try to transform his trainee from a normal girl to a bimbo before she/he changed her mindset , because he knows, that without this certain mindset, there can’t be any success in the end of the transformation. But why are these three factors so important for a bimbo doll?

Many aspects of a bimbo doll, base on the fundamental principles of femininity, no matter if these are social constructs or biological facts. I often stated, that bimbofication could be called “super- or ultra-femininity”, because in the end, a bimbo in parts, is just a girl with over-stylized features considered feminine by society. This does incude feminine behaviour, the “girly attitude”, a feminine style and appeal and special social and traditional elements. A girl has to accept and embrace all these elements and this mindset in order to lay the foundation for any further steps. The self-conception of a girl, has to consist of pride on her gender and identification with everything that comes with it. She has to upheave these factors to a level of ideology and fundamental principles, out of convincement and yes – fun. Although femininity should be a doctrine, a girl who fully embraced it, has fun to style, behave, dress and act in a way socially deemed feminine. Of course, identifying with these aspects – and living accordingly, does further influence the trainee and supports her bimbo-persona, letting it become stronger and stronger.

We talked about this factor multiple times, either in our series about the perfect bimbo tits, or lastly in one of our parts about bimbo make up: A bimbo realizes her inadequacies and the ideals of the creed “plastic makes perfect”. This is strongly tied to the neverending striving for perfection, which we also covered already. A bimbo aims for absolute, feminine perfection – and is willing to overcome her natural shortcomings, not only accepting the benefits of “plastic” (which, in this case, contains every “artificial” element, like plastic surgeries, breast implants, silicone, lipfillers, makeup and also additional perfectioning of the body through things like altered eating habbits and workout), but also welcoming them as a basic principle, not unlike a religion. Without this strong believe, and a life following these principles, there can’t be a bimbo in the end (following the basic definitions of most people in this community.).

A bimbo is a sexual creature. Every aspect of her visual appeal and many aspects of her mindset and behaviour aim at projecting femininity in an exaggerated form – which is strongly tied to sexual aspects of the feminine entity, the way she is perceived by men and her surroundings and her own sexuality. A bimbo has not only fun in showcasing her femininity in a sexual way, by wearing tantalizing outfits or showcasing her (enhanced) feminine attributes (on which she is proud) in a provocative manner, generating attention which is a basic need of bimbo dolls – but she also fully embraces her sexuality on an inner level. A bimbo savors all aspects of her femininity, acknowledging and appreciating the power she wields, the fun she can have with those powers – and of course, her own sexual needs and pleasures. In order to fully embrace these elements, a bimbo welcomes every little part of these sexual desires, instincts, possibilities and adventures – no matter if it is just about openly showcasing her tits, wearing high heels and an ultra short skirt to turn heads, gather more attention or to get a free drink, or if she gives the DJ a blowjob underneath his desk in order to meet the band backstage or to get a VIP-pass next time, or if she just has fun fucking with the three guys she just met on her way to the coffee shop. A bimbo uses her sexuality, embraces it and has fun with it whenever possible.

As you can see, these three elements combined in one mindset, do result in a bimbo doll virtually on compulson. On the other hand, without the acceptance of these three elements, there can not exist a bimbo in the end: A girl who doesn’t embrace her femininity or rejects social definitions of femininity, will never establish joy in – or a sense for styling and behaving in the correct manner, nor will she ever realize the importance and benefits of her feminine body features, detering her from optimizing or showcasing them. A girl who doesn’t accept the creed of “plastic makes perfect”, can’t become a bimbo by definition and a girl who doesn’t strive for perfection will never develop the vigor to optimize herself. A girl who doesn’t embrace her own sexuality, will never use her features or even show them, nor will she be able to enjoy the fruits of her labors, living a frustrating life of constraints. Without the positive feedback for her sexuality, she is likely to not develop any further endeavours to optimize herself further in any way. You may already have noticed, that all three factors depend on each other – and this is also why it is crucial for a girl to accept all three of them in order to form the correct mindset to become a bimbo.