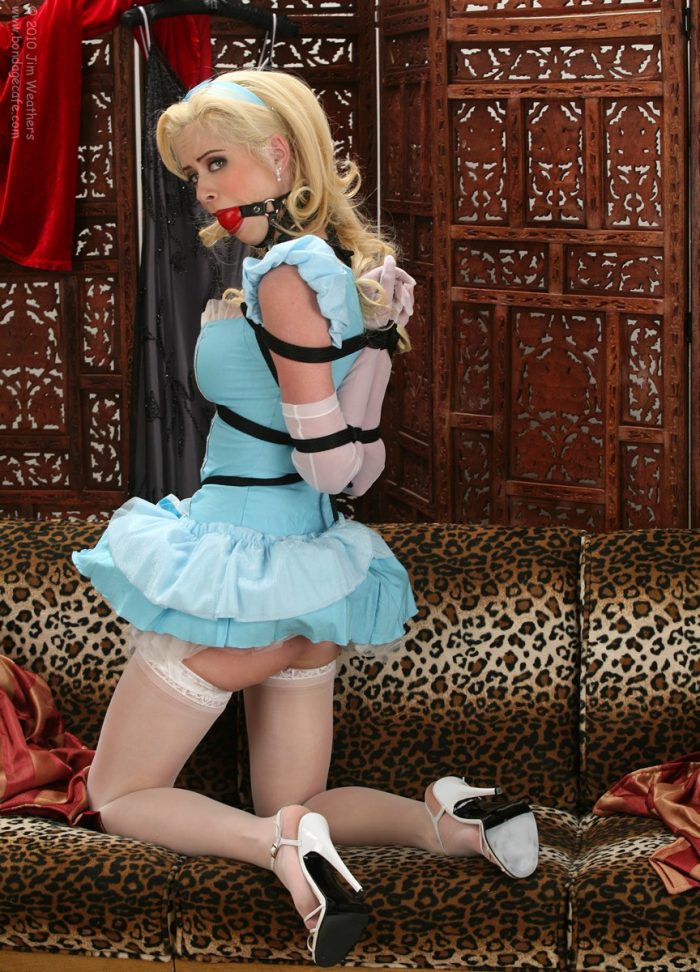 I do my best to provide anyone who isn’t really interested in cosplay at all or bimbos and bimbo trainers who don’t believe, that cosplaying actually has solid value for the ongoing process of bimbofication, with reasons why they should give it a try. Many of the parts of the PBA cosplay series deal with hard benefits regarding bimbofication and undeniable influences of this theory, but this time we’re going to talk about just one thing: Fun!

If you aren’t really into these playthings and don’t think you (as a trainer or trainee) and/or your trainer/trainee can have fun with these things, you can very well skip this part of the PBA cosplay series. We will return to the very practical reasons for bimbos to give cosplay a try with the next part.

The fun of cosplaying for bimbos, for the trainer and the trainee, results mainly from two different aspects: The outfits/costumes and the scenarios:

As you know, there are more than enough styling rules for bimbos (f.e. here, here, here, here and here) and certainly, most of them aim at very clear goals: Letting the girl appear as feminine, sexy, beautiful and saucy as possible. It won’t surprise you to hear that these exact rules do apply for bimbo cosplay-outfits too (with some slight changes, depending on the requirements of the character/costume in question, for example – the bimbo Playboy Bunny DOES break the rule of the “no pantyhoses law”, which is, in this case, perfectly fine), with some additions, which we will cover in one of the upcoming articles of this series about the Do’s and Dont’s of bimbo cosplay (one very important rule can already be seen here). Of course, this also means, that not all characters and costumes are suitable for bimbos, but the ones that are, also let the trainee appear as feminine, sexy and tantalizing as possible. So there is that – the general sexappeal of an outfit, that emphasizes the body of a bimbo and her aspects that are especially sexy. Some costumes do that in a way, no “normal outfit” could, being way more slutty or whorish and cute or girly, because they were designed to be that way in the first place. In addition, every bimbo suitable costume or character should have something, that directly addresses the play instinct of any observer and her trainer. In many of our uniform articles, I have spoken about these special benefits, like the immediate association of the maid outfit and thoughts about subservience, the thoughts one has seeing a bimbo hucow, the link between a schoolgirl and thoughts about naivity, innocence and youth, and so on and so on. This connects directly with:

Scenarios are directly tied to the cosplayed character and describe a general premise the cosplaying bimbo finds herself in. This goes in both directions, either the outfit demands for a certain premise, or the costumes gets picked to suit a special scenario. In both cases, the scenario creates an environment for the trainee that works together with her outfit in a sexual way, priming her on certain elements of sexual roleplaying OR the scenario is a sexual alteration of an already existing situation, becoming inherently sexual through the costume and the implications of that special outfit in combination with the scenario, priming the trainee on the very welcomed condition of enduring sexual tension. What does this mean practically?

A bimbo trainer wants his trainee to advance in her bimbofication, get better at certain things or to make progress in certain aspects of her training/behaviour. In this case, it is very suitable to create a dedicated, sexual “education-scenario”. The main goal is set, namely, let the trainee learn some new things or let her become better at certain things. Of course, the bimbo schoolgirl is exactly the right choice for these matters, bringing the mind of the trainee to a condition of willingness to learn and readiness to be instructed, corrected, punished and rewarded. The created scenario includes at least the position of a submissive schoolgirl (the trainee) who is open to be taught, a dominant, powerful teacher-figure (the trainer), who is interested in imparting his learning content, and, ideally, surroundings and a form of roleplaying that support the created scenario to strengthen the effects even more. These surroundings and the roleplaying could consist of: A dedicated school desk the trainee has to use, homework for the trainee, a red pen to write down misbehaviour of the trainee into a classbook, test-papers, punishment of the trainee – f.e. spanking her with a long, wooden ruler and letting her increase her grading through sexual acting. Within the scenario of this playful, sexy and fun roleplay, the trainee will be able to accept being educated far easier than in a normal situation, in which a trainer would just command “you have to spread your legs more!”.

Example situation b) – Scenario demands a special costume / Scenario is an alteration of a normal setting:

A bimbo trainee works in an office. The trainer wants her to further explore her bimbo persona and dive deeper into the mindset of her ongoing bimbofication to let her progress even more. The normal scenario of her workplace demands a special outfit, namely, the bimbo secretary. The bimbo secretary is a sexual alteration of a “normal office/business outfit” that is far more feminine, sexy and bimbo suitable than typical, casual office dresses and bound to draw attention and compliments and to make the bimbo more comfortable with her bimbo persona, her feminine sexappeal and the ongoing sexual tension a bimbo lives in, by altering the “boring, normal” office situation into a bimbo-related, sexual scenario. This normalizes the sexual scenario and transforms it into a part of her daily life.

So, these are three examples of scenarios and connected costumes. Of course, there are many more, and each of them promises one thing, along with the usual benefits of cosplay regarding bimbofication: Fun! This is why we are here today. The motivation to progress in bimbofication and to try out new things is directly connected to sex and fun. New things and variety are always exciting, thrilling and interesting, whereas sex that has just become a habit guarantees boring routines and doesn’t provide new experiences, which also doesn’t allow the necessary excitement to make progress and try out new things. Every trainee and every trainer should be able to let go, give oneself up and just enjoy the ride of a new experience, provided by a special scenario and the connected costume. Let the play instinct take over and discover new possibilities of having sex in a playful manner – HAVE FUN (and simultaneously don’t forget that all these scenarios do have additional benefits for the ongoing bimbofication)! So, what about some examples, in addition to the ones I gave you above? Sure thing:

I already touched that. A trainer can have a relaxing evening, put his legs up and let his trainee serve him some beverages or snacks, while he watches TV. Of course, she does this in a sexy and suitable maid outfit! This is the opener for an interesting situation in which there is a clear power gap, and the trainer can teach his trainee how she should behave as a good bimbo trainee – in a fun, playful manner!

Let your trainee confess her most wicked fantasies! You get to know her even better and maybe she finally will get the experiences she always craved but didn’t dare to speak of. Reward her for her openness – and if there are some really, really „forbidden“ fantasies she has to confess – „punish“ her by whipping her little ass, like they do in those nunsploitation movies.

This is kinda self-explanatory, isn’t it? Milk her, breed her…. that’s what you do with a bimbo hucow!

These are just some examples – but I am sure you get the deal. Of course, for trainers, bimbofication is about strategy, training, techniques, spending money, time and effort – for trainees it is hard work, also spending money, time and effort – but NEVER EVER forget the fun! Let yourself go – just fulfill yourself some teenage-dream! Ever thought Princess Peach was kinda sexy back in the days? Well, shackle the big titted bimbo version of her and fuck her brains out. Surely, your little, Peach-cosplaying trainee will also enjoy being the helpless damsel in distress, a princess getting used like a whore, getting fucked in your private castle. Bimbofication is hard work – Remember to have fun. Play. Enjoy. Let your imagination run wild. Be creative. Let your fantasies take over! Now go out there, and show your trainee what the big bad wolf would have done with Little Red Riding Hood if she had been a bimbo…