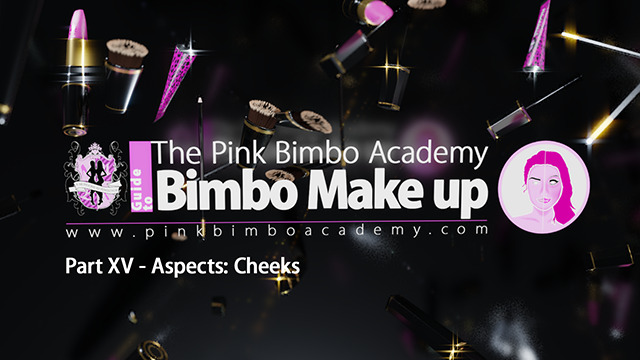 “…Very soon after this the queen had a little daughter who was very fair, had rosy cheeks, and hair as black as ebony; and they gave her the name of Snow White.” – Snow White, Fairytale (Brothers Grimm)

…yes, yes, yes – we want the rosy cheeks for this article, not the ebony hair – we already talked about that, so why even bring this up? Because today we are going to talk about a factor of beauty regarding women that has been a thing for decades: Rosy cheeks, aka “how to apply rouge and blush for bimbos” – so let’s kick it:

No – stop again! Before we begin, just a quick reminder: This article is NOT about using blush for contouring! For that, go to the corresponding post of the PBA make up series! This lesson has to be seen as something different, but equally important. A bimbo has to include contouring in her daily make up routine and apply rouge in the way described here in addition! It is not one or the other – it’s always both! Adding blush like we discuss here is a step you make on top of your already contoured face! Do NOT skip it! Contouring is for sculpting your face to let it appear more beautiful und closer to the bimbo ideal face shape – adding blush to your apples is that “extra effect” we are talking about today. Make sure you identified your correct face shape (you should have done that already for contouring and your eye brow make up!) and apply blush on your apples in the most benefitial way possible, like described above in our papers!

Now, we can begin. We already talked about the history of make up and the feminine beauty ideal over the centuries, in which applying some form of blush to achieve rosy cheeks has always played a role (in ancient Egypt, ground ochre was rubbed on cheeks and lips to achieve those effects!), but did you know that one of the deadliest plagues in the Victorian era was seen as something “unpleasant and inconvenient, but somewhat welcomed because of its benefitial effects regarding rosy cheeks” by some members of society? Yes, an illness that once caused about 25% of annual deaths in Europe was regarded as, well, “not so bad, because it has its benefits”, because it caused symptoms that were in line with feminine beauty standards. We are talking, of course, about tuberculosis. Weight loss, consumption (which was regarded as something very feminine, because… fragile… I guess?) and other aspects caused by that sickness did fall in line with the beauty standards back then, especially one factor: Rosy cheeks! Of course, the pale skin caused by tuberculosis did strengthen the effect of red cheeks even more, which made it even more benefitial for certain members of society in the past. Yes, the fragile physique and the pale skin of a women was an indicator for the high social status of a female, because obviously, she didn’t have to work on the field the whole day – a burden deemed very unattractive, and only one of the reasons why high society tried to dissociate itself from the lower social ranks visually. But why didn’t those women use rouge to mimic those desirable rosy cheeks? Well, we are talking about a time, in which the use of make up was mainly reserved for actresses and prostitutes (both of whom were of even lesser status than the beforementioned workers on the fields), so it would have caused a scandal had it been discovered that one high-born lady of social rank did use make up to mimic those rosy cheeks one would achieve by getting tuberculosis. A no-go. Today, this has changed. No one has to die anymore to get those rosy cheeks even old fairy tales tell us about as something very noticeable and beautiful. Todays “high-born” princesses (aka bimbos) use make up to achieve that look! But why is this even regarded as beautiful and feminine – even back then in ancient Egypt, so much that women were willing to DIE for that? Let’s have a look:

Rosy cheeks are a sign of good genetics and good health. Yes, this sounds very paradoxical, regarding the fact that we just talked about the rosy cheeks caused by a deadly illness. But overall, good blood circulation and a rosy, warm skin tone are typical indicators of the impeccable condition a human body is in, especially if you compare it to the visual appeal of the facial skin caused by most other diseases: Sunken, gray, pale, bloodless and sometimes cadaverous. Also deficiency symptoms include the absence of rosy cheeks, depending on the type of shortage the body endures – something that always played a great role in natural selection and the instinctive mate choice throughout the evolution of life. This connects directly to a ritual, developed by humans over decades: Travel back in time to when you were a little kid. Every time your aunt Gertrude or your grandma Mildred visited your family, especially when it was your birthday, she used to grab you, pressed some big smacker on your face and then she used to pinch your cheek while shouting something like “OHHH, look how you’ve grown!”. More or less like this, am I right? But why? Well, like I said, the increased bloodflow, caused by the violent pinching, did cause your cheeks to blush. An effect people WANT to see on a little child, because it suggests that everything is alright and the offspring is in good health condition. So there again we have to connection to the health factor, but is there something else? Of course there is: Because we associate these “rosy cheeks” with small children, they have also become not only a sign of femininity but also a sign of youthfulness! This relevance becomes absolutely obvious, if you have a look at pop cultural renditions of females “making themselves look younger than they are in a sexual way” (f.e. bimbo schoolgirl play): Exaggerated, rosy cheeks, achieved with strong make up and blush are usually one of the most important factors here! (By the way, pay attention to the PERFECT execution of the formal bimbo curtsey she does in that video! Perfect! This is how it should look with such a short skirt!). Another factor, also often exaggerated in the renditions of “young, innocent (school-)girls”, especially in pop culture and even more in hentai, anime and manga, is the effect of blushing as a sign for such traits as innocence, naivety, ingenuity, inexperience and sometimes virginity of young girls, especially in sexual situations. This effect comes from the fact, that humans tend to blush in situations that are either shameful, embarassing or confusing – a natural reaction resulting from dilated blood vessels and enhanced blood flow, stimulated by messenger substances to shift the body into an alarm condition to deal with the unfamiliar and embarassing situation. This is widely regarded as cute, sweet and youthful – when it happens to females. We already talked about these connotations in many articles before (like f.e. The bimbo schoolgirl article) and examined, why these aspects are very welcomed for a bimbo and why there is a certain sexual attractiveness to be found there. Speaking of sex, let us come to the last positive element of this: Reaching the point of an orgasm, women tend to blush too. This is also true for humans in general – because having sex is usually an activity that is physically demanding, but female bodies especially change during sex by increasing the bloodflow and by dilating blood vessels dramatically. This leads to the typical “red face” and those “rosy cheeks” after sex. So, this connotation is something that is unconsciously burned into the instincts and the minds of men – a connection that engages with males unknowingly whenever they see such rosy cheeks (also widely used and greatly exaggerated in hentai productions).

“Blush makes me feel … like my whole look is complete.” – Kylie Jenner

By now, something should be very clear: Because of the five different benefits (1. Traditional, feminine beauty, 2. The youthful appeal, 3. The indicator for good health, 4. The “cute naivety effect” (school girl effect) and 5. The sexual connotation) every bimbo always has to make use of rosy cheeks by applying rouge and blush in the way described above in our papers and every bimbo has to include this into her daily make up routine in addition to all other steps – ALTHOUGH every bimbo should control the level of blush she is applying in regards to the effect she wants to achieve and in regards to the visual appeal she is going for! For example:

A bimbo that is wearing a bimbo schoolgirl uniform, or goes for a very teeny look has to use vast amounts of blush on her apples and cheeks – while a bimbo that tries to achieve a more “grown up bimbo look” (like for example, the professional bimbo secretary) should use a little less! NEVER “no blush” – but controlled depending on the overall style, look and the occasion. Needless to say that in general, “more is more“, is correct here again… we are talking about bimbofication after all…