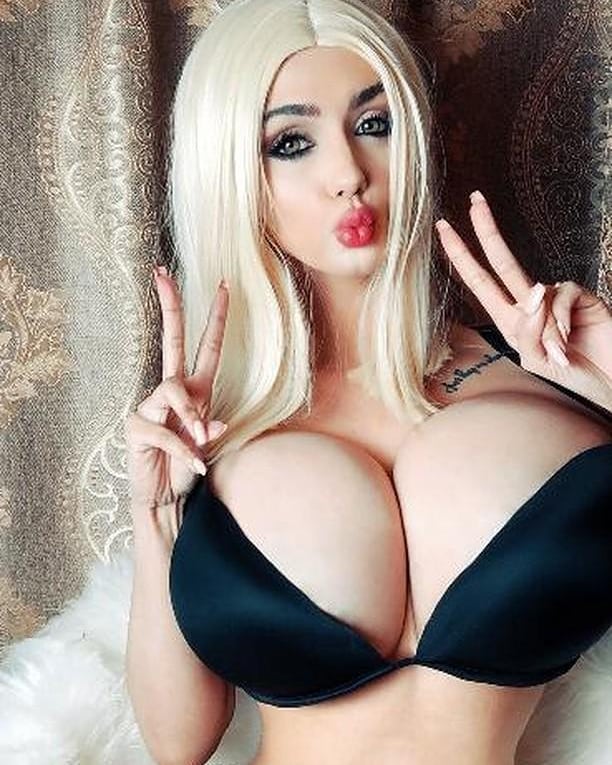 As I promised, the articles I’m currently working on and going to post in the near future are and will be VERY pure-bimbo-related, meaning little to no “fancy”, “far-fetched” or “only-in-details-connected-to-bimbos” (but also important) content – but more of the content you would expect from a bimbo focused or bimbofication related website (as if you couldn’t tell with our last rolemodel). Meaning: Huge, enhanced tits, sexy outfits and beautiful, blond girls, short skirts, high heels, the color pink, and artificially optimized females. This doesn’t mean we will pause with stuff about gimbos, the bimbo cosplay-series and so on – but instead I will focus on the more bimbo-related themes within these series over the next few articles. We talked about our first bimbo (cosplay) rolemodel, Jessica Nigri some time ago, because she may very well be the most important and well known “bimbo-like-cosplay-girl” out there, but she definitely isn’t the most bimboesque at all when it comes to how close a cosplaying girl comes to bimbo perfection! Sure, she has slightly enhanced, tits, blond hair, is overall a very beautiful and feminine girl, buuuuut… todays rolemodel takes the cake and may very well be THE most perfect “bimbo” amongst all the cosplay-girls out there (meaning girls who would identify as a cosplayer and not as a bimbo first). Adriana Alencar (or “Dri”) is the name of this cosplaying dream girl, an outstanding cutie, showcasing how well bimbofication and cosplaying go together! Let us have a look:

Adriana could absolutely be presented here as a normal bimbo rolemodel, no doubt about that, she has most of the necessary features and properties it takes, but honestly, although she does like to play with the common bimbo stereotype and seems to have fun “cosplaying” a bimbo, I have no idea how she feels about the topics of bimbofication and if she would call herself a bimbo. No matter what, Dri calls herself a cosplayer, which is why I decided to present her to you as a bimbo (cosplay) rolemodel – a type of girl we could use more of! As far as I know, Dri was born in Brazil, in São Paulo, one of the largest cities there. She became kinda famous on the internet, before her true bimbofication, when she posted a photo of herself, wearing a Jack Daniels shirt and another one wearing a Ramones shirt, showcasing her astounding waistline, which results from her wearing a waist strap for over ten years (sometimes even over a complete day) and using a “reducer gel”. After that, Dri began modeling and entered the cosplay-community, in which she became very famous and gathered many fans who admire her incredible body and feminine beauty. Also her bimbofication continued: Dri had multiple surgeries, including breast enhancements with big, silicone implants and most likely a Brazilian buttlift – explaining her insane curves. Adriana is a true bimbo-beauty, her face may be completely unaltered, but she has such a cute and beautiful visage, that one couldn’t even say if an angel in white kissed these proportions or not. Sadly, she decided to go with red hair (at least, it is pretty long), which is such a shame, because the pictures in which she wears a blond wig or had her hair dyed blond, she is clearly the most beautiful version of herself – something which would support her bimbo-persona even more. So let us hope she goes blond again. The most defining features, which set her apart from EVERY other cosplay girl are her enormous, big, enhanced, silicone tits, satisfying the basic rule for bimbos regarding breast sizes. These tits are just amazing! I would say she could/should go even bigger, but what we have now is absolutely bimbo-upper-class and an absolute attention-drawer. I wish more girls in the cosplay community would see the stunning beauty, the femininity, the sexappeal and the benefits of such a rack and go after her. We already mentioned the absolute insane waistline of this angel – something that might seem unreal for many people, but in connection with her beautiful, enhanced, giant tits – this waist and her wide hips form an amazing silhouette, of which some would say it approaches bimbo perfection (although I am not a fan of big butts). Furthermore, Dri has some stunning, sexy legs, which she showcases in short skirts, high heels and tight bodies, as well as the rest of her body. Let us now come to her cosplay activity:

Of course, her costumes are not as elaborate, costly or flamboyant like the ones bimbo (cosplay) rolemodel Jessica Nigri wears – but this is no wonder, considering that Jessica built an empire with many professional helpers and supporters, who are able to provide her with the best materials and crafted items, no matter the costs. Dri has a more “down to earth” approach to the topic of cosplaying, which is not exactly ideal for bimbofication purposes (bimbos should always go for perfection – even with their costumes!), but doesn’t play a huge role regarding the benefits she extracts from this practice: Adriana loves to cosplay bimbo suitable characters, like shown above, Bowsette or her amazing rendition of a bimbo schoolgirl – something absolutely essential for cosplaying bimbo girls, and something we will talk about in the next parts of our bimbo-cosplay-series. On the other hand – Dri seems to love to cosplay bimbos in the abstract (have a look above, she does wear the pink Oh Polly dress we talked about…!)! This is exactly what I talked about in one of our last articles about the benefits of cosplaying bimbos, and something you can observe here in practice! The act of cosplaying a bimbo, and the bimbofication itself are reinforcing each other – providing a much better outcome and huuuge improvements overall. She loves to wear that tight, short, pink bodycon dress, pink high heels, she loves to showcase her big tits with unmatched necklines (even with her nipples piercing through – like every good bimbo should do!), her enhanced ass, her legs, her insane waistline and her beautiful face! This is correct bimbo behaviour (she even does Ahegao!) and explains why she has the pole position regarding bimbo perfection among girls in the cosplay community. THIS is how it is done! I hope she improves even more, becomes a blonde again, maybe gets even bigger tits and confesses herself to the bimbofication community and designates herself a true bimbo doll. I hope this rolemodel showcases the benefits of bimbo cosplaying to the sceptics who didn’t understand why I introduced the whole topic to the community – if so, I would like to redirect you to our bimbo cosplay-series in order to learn more about this. And be honest here: Don’t tell me you wouldn’t want to fuck this girl dressed up as a bimbo schoolgirl, Bowsette or Vampirella every other night… 😉