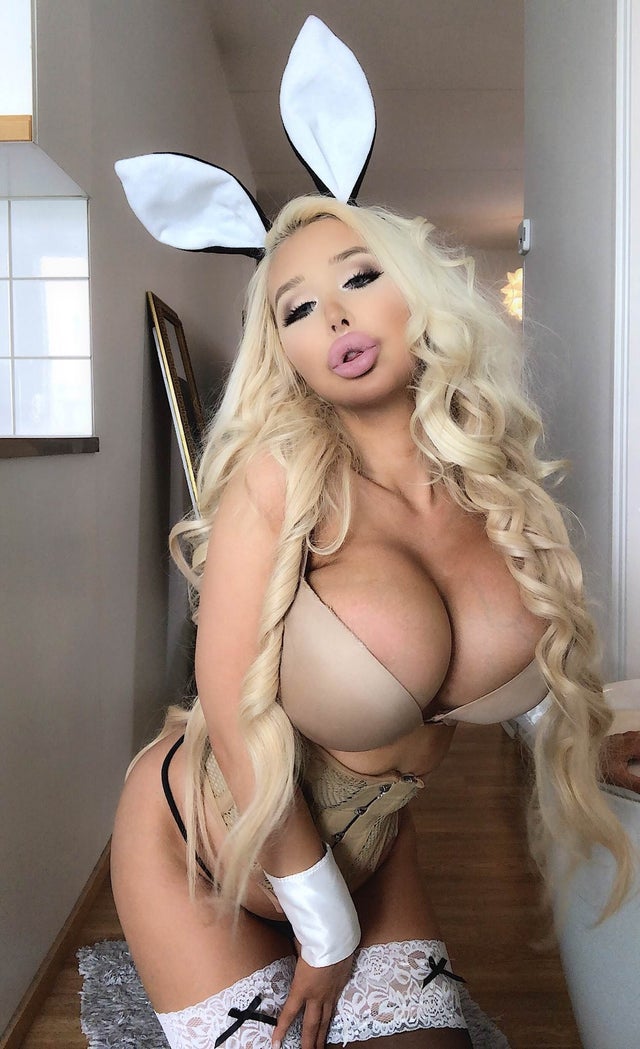 This is again one of those rolemodel posts many of you guys have expected me to bring out way earlier, considering that this little princess is regarded by many members of the bimbofication community as THE perfect bimbo doll in more than just one aspect. As usual, I can only reply with: I am sorry guys… yes, I know she is FANTASTIC – but there are MANY absolutely stunning bimbo rolemodels out there, and I only have so much time. Normally I try to match the rolemodels I am writing about to some sort of series or currently ongoing topic on the Pink Bimbo Academy, so it might happen that the rolemodels you would consider the absolute most important beyond any doubt just have to wait until it’s their turn. For this cutie, the waiting is over… Today, we are talking about bimbo rolemodel and (bizzarre) princess Amanda Toy (or “Amanda Ahola”)!

So what is so special about this blonde bimbo beauty? Well there are quite some remarkable, different aspects we have to talk about, but let us just start with the most obvious things – her enhanced body and her visual bimbo aesthetics:

Amanda underwent quite a series of surgeries (one nearly ended in a catastrophe!), transforming herself from a cute but rather normal girl into the enhanced plastic bimbo we see today. This bimbofication was a project she already planned when she was still VERY young, a project she still follows even now, several years later. Her first surgery, was her first breast augmentation at the same time – when she was 18. Since then, she had two more breast enhancements, leaving her (for now) with 1200cc implants. In addition, there was a nose job, lip fillers, botox injections, hair extensions, cheek fillers and dedicated, disciplined routines to maintain her flawless body, her body shape (f.e. “corset training” – something we will definetely talk about in the future!) and the overall look. Let’s get into the details: Amanda has absolutely STUNNING, long, blond hair! This is EXACTLY how it should look like, with her enhanced, platinum blond mane, reaching from her head to her sexy butt. Amanda has something many bimbo dolls would envy her for: Some huge, open, expressive, clear, blue eyes – and since some of the last articles of the PBA makeup series, we all know how important big, open eyes are… and yes – within that series we will talk about that color aspects and contact lenses. It is mainly because of these huge, blue eyes that Amanda does possess a very unparalleled, naive and innocent “doll expression”, an aspect not unwanted within bimbofication and surely something MANY people in the bimbo community would classify as extremely important. This doll-like-appeal is surely supported by Amandas enhanced, tiny, thin and small nose and her huge lips. The overall look of a bimbo-DOLL! If we go further down, we can’t overlook Amandas beforementioned 1200cc tits. Surely, those are absolutely BEAUTIFUL and sexy, but… yeah… they could be bigger – because Amanda is barely fulfilling the basic rule for bimbos and the minimum breast size. But this is most likely not a problem! Even though Amanda originally didn’t plan to get further surgeries, after she experienced serious complications, she made up her mind and issued a bold statement:

“The [third] implant size are 1200cs, and I honestly want to go bigger. It doesn’t matter how big I go, it will never be big enough for me.” – Amanda Toy (“I Nearly Died To Look Like Barbie”, Hooked on the look, Barcroft TV)

Isn’t that a proper bimbo speaking? My god… this surely warms my heart! What a mindset! THIS is the proper conception of a true bimbo! THIS is what we need, the mindset I was talking about in my article about suitable bimbo beliefs! But before we come to her outstanding mindset – we still have some more aspects of her body to talk about: Amanda maintains a fairly well body shape, a flat belly, a very good hip to waist ratio (thanks to her corset training), but it wouldn’t hurt if she would visit the gym more often in order to make everything a bit more toned and firm. Her sweet, sexy ass and her beautiful legs round up the whole picture. Of course there are also her beautiful, long, feminine fingernails, her enhanced eyelashes (we talked about that too) and more details, giving this babe that “special bimbo doll touch”. Let us now come to the next three aspects that are absolutely outstanding:

“When people call me fake or Barbie, it makes me really happy.” – Amanda Toy (“I Nearly Died To Look Like Barbie”, Hooked on the look, Barcroft TV)

“My number one ambition is looking plastic, as plastic as I can.” – Amanda Toy (“I Nearly Died To Look Like Barbie”, Hooked on the look, Barcroft TV)

Yes, this is about the beforementioned mindset. Look at these three quotes from this girl and let that sink in. Yes, she is not the only bimbo rolemodel saying things like this (we talked about Lacey Wildd f.e., and there are many more) – but I wanted to use this opportunity to remind you of my article about the “Church of Plastic”. THIS mindset – THIS self-image, THESE goals, the understanding of the necessity of plastic perfection, self-optimization and the acceptance of “fakeness as a beauty ideal” makes this girl FAR superior to EVERY other, normal girl who just adapts certain bimbo traits without having THIS perspective. THIS is what we need – THIS is the way a true bimbo should think! These are the thoughts of a nun of the Church of Plastic! Just these three quotes showcase, that Amanda did internalize and realize fundamental truths of bimbofication, truths we already talked about:

“My number one ambition is looking plastic, as plastic as I can.” What can I say? Amanda made VERY clear, that she absolutely internalized another FUNDAMENTAL truth of bimbofication: The necessity of plastic! Yes – we already talked about this and it is one of the most basic foundations of the Church of Plastic too. “Plastic” as a collective term for everything “fake”, “artificial”, “enhanced” and “perfected” is the opposition of everything “natural”, “flawed”, “arbitrary”, “unoptimized” and “inadequate” – the declared enemy of the members of the Church of Plastic and bimbofication in general! A bimbo accepts the truth of the term “plastic perfection” or the saying “plastic makes perfect” and strives for the optimized, enhanced superiority of “the plastic look”!

“When people call me fake or Barbie, it makes me really happy.” Of course, here again, pride and understanding of the fundamental truths is showcased – especially the righteous pride in being regarded as “fake” and “artificial” and being compared to one of the undying rolemodels of every bimbo: Barbie! Barbie, as the artificial, larger-than-life icon of perfect femininity (at least, that’s what she used to be – until she got compromised, perverted and mutilated by nowadays identity politics, inclusivity and 3rd wave feminism) as a true rolemodel is more than just an average doll – she is a symbol, meaning MUCH more than what she actually is. However, every bimbo should always look at her rolemodels very carefully! But this leads us directly to the next aspect:

I already mentioned Amandas “doll like look” above, so what do I mean with that? Well, of course it isn’t just any “doll like look”, like I said, it is a very strong, “naive”, “innocent” and maybe even “clueless” look – some would say “brainless”, “dumb” or “brainwashed” – which is most likely intended by Amanda. If you read my FAQ or already follow me for quite a while, you undoubtably know, that I do NOT think, that bimbos have to be dumb, brainless or stupid – in fact, I believe that most of them are very clever, business-minded, successful, intelligent girls. I would even go so far, to state that these topics do have absolutely no business in the bimbofication community at all, because all it does, is encouraging these pathetic fantasy-fags in roleplaying, creating captations and pseudo-hypno-gifs with flashing colors or pseudo-subliminal messages (spoiler: This bullshit can not work!) without realizing, that bimbofication is a very real thing, completely separated from their miserable twitter-accounts and their wretched mindgames and fantasies, in which they roleplay “brainwashed, dumbdowned, hypnotized wannabe-bimbos”. Anyway, it is not like I don’t know why these topics do play a role in the bimbofication community, even for serious bimbos, trainees, bimbo lovers and trainers. It is exactly about this absent, naive look Amanda radiates, something that can be VERY sexy, feminine and cute. Maybe we will talk about this effect in the future and examine the huge misunderstanding that lets people think bimbos have to be brainless indstead of innocent, cute and naive… However, it is exactly that “brainwashed” look that leads many people to the conviction, that Amanda is indeed one of THE most important and most amazing bimbo dolls out there. No matter if you want to call it “brainwashed” or “naive” – I do understand those people…

Last but not least: Did you know, that Amanda is THE number one bimbo I would mention when asked about the connection between true bimbofication and cosplaying/roleplaying? Well, maybe you should have a look at her social media channels or the videos she is producing! Amanda does not only understand the fundamental truths of bimbofication we spoke about above, she also does understand the fundamental benefits of cosplaying in regards to bimbofication and the reasons why EVERY bimbo should do it! Like we already discussed in our ongoing series about bimbos and cosplaying, there are many different benefits and reasons – as well as many different rules (we will talk about that in the future), and Amanda does respect all of them! She only cosplays EXTREMELY bimbo-suitable characters, like Princess Peach or Bowsette (both VERY bimbo suitable and VERY benefitial!) in an extremely sexy way (even doing Ahegao – like a good bimbo should!), as well as many other bimbo related roles, from the bimbo schoolgirl to the good little bimbo trainee (Personal inquiry: Will we see a bimbo version of Sailor Venus and the bimbo hucow any time soon? 🙂 ) ! Have a look at her roleplaying and think about the connection between cosplaying and bimbofication again! THIS girl, showcases how benefitial this combination really is! Talking about outfits, in addition: Her choice regarding colors, especially that special bimbo vibes creating combination of pink and white is spot on most of the time, although I would love to see her wearing her heels more often, instead of leaving them off.

As you can see, there are MANY reasons why Amanda is one of the leading rolemodels for all girls out there! She is a prime example, regarding dedicated, ideologized bimbo dolls and EVERY girl should go after her! THIS is how you should think, THIS is how it should look! If you want to know more about her, watch her “Hooked on the look” documentation, or this very interesting video, from which you will get even more insight and learn about a VERY impressing bimbo mindset!

SEE her amazing videos on Manyvids and support her!

SEE her amazing videos on Modelhub and support her!

Please support me on my patreon! Every donations helps me writing better and more posts!