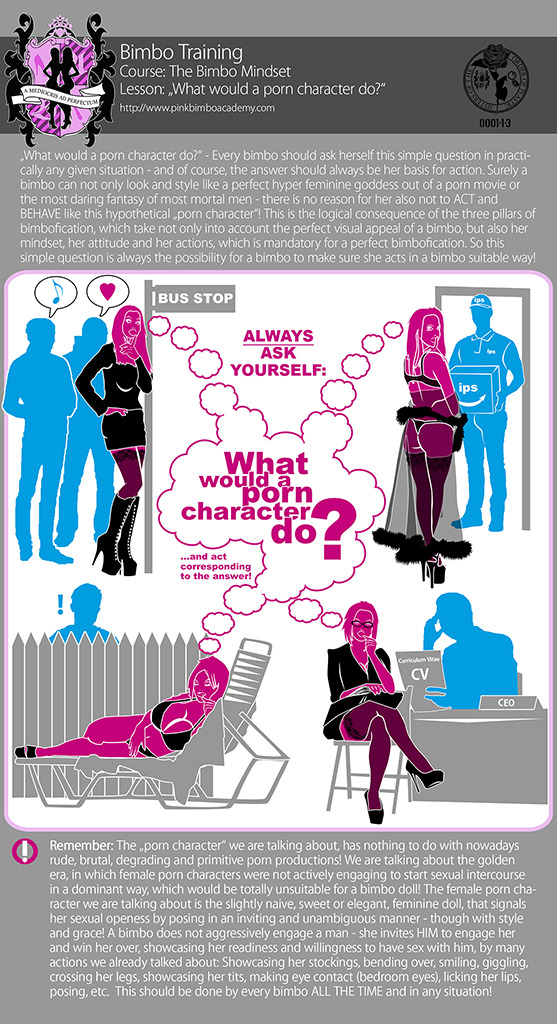 Okay, so now that we’ve got that sorted out, let me ask you one question:

Why should it stop with the visual appeal, and why shouldn’t the same regularity and logic be applicable for female behaviour?

Why not? Let that sink in… But I am very sure you won’t be able to come up with an answer to that, apart from “I don’t see any reason why the same logic wouldn’t be applicable to that” – because, EXACTLY: There is no reason to assume that there is a difference to be found at all! So, if we want to formulate this realization in one simple, easy to remember and easy to understand memorandum, it would sound like this:

3. This rule is always in place and should be your guiding principle at all times!

Remember: Being a bimbo is not only about the tits, the look, the style or the clothes – it is also about the mindset and the correct behaviour! There can no complete bimbofication without these aspects, and there can not be bimbo perfection without this! This should also be something every trainer should have in mind, especially when he gets home and his trainee rides the postman… (Correct trainer behaviour: Say: “What a good bimbo doll you are” – and join.)

Edit: I added a screenshot of a twitter poll I made some time ago, regarding this idea. As you can see, the absolute VAST majority DOES want this to happen. So, what are you waiting for, girls?

OotSoP code for further teachings regarding this topic: 0001-1-3