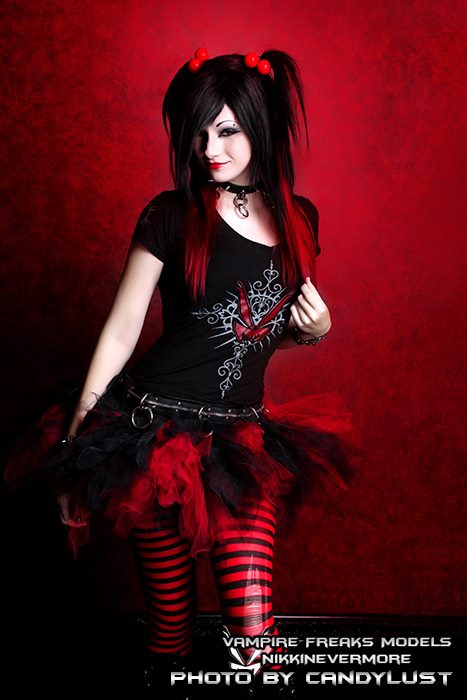 Finally, last part of the gimbo substyle series! To be completely honest with you, I am very, very, very relieved and happy to close this chapter of the PBA. “Why?” do you ask? Well, I’ve mentioned this again and again from time to time, but despite some very welcomed, rare and positive examples and exceptions of girls disposing either some of the gothic aspects as well as the necessary, general bimbo features to create the appeal of what we call “gimbo” here at the PBA, I feel that the theoretical concept of the gimbo idea, I introduced to you back in the days, fails in face of reality. It is very demotivating to see a general lack of understanding and indifference, coming for the girls in the gohic culture, and even the girls who are somewhat interested in the gimbo idea, get it all wrong and combine more or less the worst parts of the gothic culture, with the rather unimportant details of bimbofication, thinking that they are indeed following the “gimbo ideals”. Yes, there are some very impressive rolemodels, like Lurcifera, Sambalina Roselli and even Kitty Ink (although she doesn’t even identify as a gimbo – I do think that she currently does embody the “gimbo idea” the best!) or some “sexy, pretty gothgirls”, like Starfucked and Dani Divine – but still, there is nothing to be seen of a general movement or trend, or even a “gimbo queen” like “a hypothetical Candy Charms of goth girls” – nothing but major rejection from goth girls or wrong ideas about how a gimbo should be like. So – will I drop the whole concept and never come back to it? Well… no. If some suitable rolemodels pop up, I will write rolemodel posts about them, that’s for sure. I will continue to write about some very specific items or details, taken from the gothic culture and I will mention special gimbo elements in other articles if there is something interesting about it, but after this last part of the “gimbo substyles series“, most likely, I won’t come back to the topic to such an extend. I have had enough frustration, dealing with a deliberate missunderstanding of my gimbo teachings, the general ignorance, complacency and indifference of most goth girls and absolutely subpar visual appearances. Once and for all, goth girls: YES – ALL the bimbo rules do apply for you too! Yes, you DO NEED huge implants for your tits! YES – High heels are ALWAYS mandatory! NO – Tattoos DO NOT look beautiful! YES – A gimbo SHOULD be blond too! NO, pants are NOT an option! NO – a brutal, masculine, dominant or martial style IS NOT sexy! YES – You HAVE TO HAVE a PERFECT body! And: OF COURSE! The need to perfect yourself is absolutely there! This isn’t a matter of perspective, taste or style – Just for ONE second, consider it possible, that MAYBE, just maybe, there is some truth in what I say, and that I might be correct with my assumptions, instead of just being ignorant! But now, let us have a look at the last of the gimbo suitable substyles (No, other styles apart from the ones we talked about are NOT an option for gimbos: No “Metal” style, no masculine, unfeminine, brutal and unaesthetic visuals! A gimbo HAS to be sexy, feminine and beautiful!):

To be correct here, actually, we are talking about two very different styles here. In the gothic community, it makes a huge difference, following the “Gothic Lolita style” or the “Emo style“, which wouldn’t be considered as a part of the gothic culture at all by many – however: Here at the PBA, we are absolutely NOT interested in the nuances and meanings of these subcultural differences, we are just talking about styles that would be suitable for a gimbo under definitive conditions. Because the gothic lolita style and the emo gothic style do have some elements in common (and I don’t mean “direct” styling aspects), we are bringing them together here to create a style, that is usable for a true gimbo doll. Before we talk a little bit about the backgrounds, let me first establish what these two very different styles have in common at all: Both styles may not even have the intention to do so, but both styles let a female participant look basically “cute, girly and sweet” first and foremost. If you don’t know what I mean, think of the general effect of these substyles in terms of “bimbo archetypes“: While the “fetish/BDSM-Goth substyle” evokes thoughts about aspects of the bimbo slave archetype, the “Victorian/Dark Romantic substyle” calls upon the same effects as the bimbo princess archetype, both, the emo and the gothic lolita (or “golo”) styles do create a visual appeal perfectly suitable for the bimbo babygirl archetype: The rendition of a very young, cute, sweet, vulnerable, innocent, little girl in need of protection. How does that work:

For the Gothic Lolita style – it’s already in the name: “Lolita”! In case you didn’t know, we already talked about the “Lolita-effect” in our article about “pigtails for bimbos“:

“(…) the effect pigtails can have can be part of the so called “lolita effect”, named after the notorious book “Lolita” written by Vladimir Nabokov (1955), in which the sexual attraction of the very young and eponymous Lolita is the crucial point of the whole story, which got filmed by legendary director Stanley Kubrick in 1962, and which gave name to the “lolita-fashion”-movement in Japan, strongly consisting of many different aspects which represent youth and young girls like schoolgirl uniforms and pigtails.” – Bimbo training – Bimbo hairstyling: “Pigtails for bimbos

So, we foreshadowed this article about the “GoLo” style back then, writing about hairstyles – another evidence for the thesis, that every small detaild and every aspect is connected here on the PBA and within bimbofication in general. As already mentioned, the Gothic Lolita style evolved in Japan and after that in other countries in the 1990s and 2000s, sharing many aspects with the “Victorian substyle” but with a completely different spin: Rising from the “cuteness culture”, or, the “kawaii style” in the early 70s, elements of the western goth culture, as well as of the European, Victorian style were mixed with a dedicated sweet and cute appearance and a considerable amount of girly sex appeal: Voluminous but short skirts and dresses, petticoats, crinolines, corsets, knee socks, stockings, high heels, wigs – everything you already know from the Victorian substyle – but… kawaii:

The whole visual appearance aims at creating a distinct, doll-like, fragile, sweet guise with the “eternal beauty of childhood” and the vulnerability of a young girl. Although utterly independent from this subculture, the “emo gothic look” shares some of these elements: A fragile, immature yet sweet and sometimes sexy visual nature – even though most clothes used there are absolutely incompatible with the gimbo ideals and can therefore never be used: Skinny jeans, T-shirts, sneakers, etc.. The “emo subculture” emerged in the early-mid 1990s, and seeped into different other scenes, amongst them the gothic subculture, which led to a crossbred sub-sub-movement, named “emo goth”, although the whole genre usually experienced rejection from all other subcultures. So, what can we pick up from these two styles that only have in common to let their females appear sweet, young, girly, vulnerable, cute and girly? Well, not much to be honest (you can tell I’m, fed up with this, can you? Yeah, I am… the girls in the gothic scene are the most stubborn and ignorant wenches you can imagine, and it really feels like they are not even worth the time I spend on writing these lines, so let’s get it over with…), but there is still enough to create some gimbo-suitable styles for goth-bimbos who do like to express their “gimbo-babygirl”, so let us have a look:

Ditch the cuffed jeans and the tight pants (emo) and the pantyhoses (both styles), as well as the sneakers (emo), all flat shoes (both styles) and platform wedges (golo). Your goal in this case is to look as sweet, girly, cute, young and sexy as possible, by simultaneously respecting ALL the different bimbo styling rules! Wear cute, but high heeled stiletto shoes or boots (some Bordellos are VERY suitable!), ideally with cute bows or other girly elements! Wear stockings and garter belts instead of pantyhoses and pants! Use very short versions of Victorian style dresses and skirts! Either, gothic lolita as well as emo gothic, make use of sweet and girlish accessories, like bows, ties, patches, charms, jewelry, etc. – adapt these things and use them in combination with sexy and feminine fashion pieces. Both scenes deal with special and sophisticated hairstyles a lot – Make use of that! There is not much else to say: At this point, I am like: “Well, goth girls, you know the rules… do whatever you like with that. Apart from those very few exceptions, the gothic subculture feels like a lost case regarding femininity and bimbofication.” – I hope I am very wrong regarding this, so feel free to disprove me there, I would be glad. This is the end of our gothic substyles suitable for gimbos and like I said, I’m completely fed up. This doesn’t mean I won’t come up with exceptional rolemodels, worthy of the term “gimbo” in the future – or with special fashion pieces or aspects… but the main deal is over now. I am sure, most readers don’t care about that – and to the few goth girls who might read this and actualy do care: Come at me. Show me this isn’t a lost case.