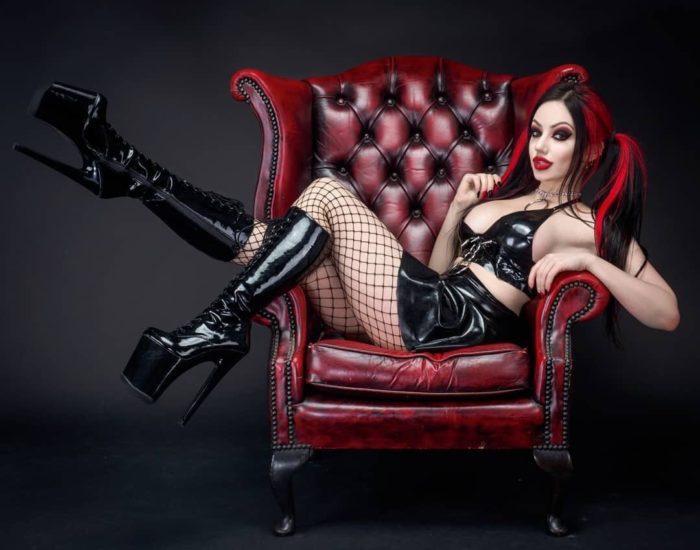 It’s either that or THIS what most people think about, when they hear the term “gothic girl”: Pale, tattooed girls, in skintight, black latex or leather, with black and colored hair, wearing sky high, black boots with pointy stiletto heels, corsets, catsuits or tight, black rubber. And this absolutely is a sub-movement within the gothic culture, although it has to be mentioned, that by far not every gothgirl wears fetish outfits and not every girl wearing black, shiny fetish wear is a gothgirl! Borders are pretty fluid there and this accounts also for the two major gimbo rolemodels we already talked about on this blog: Dani Divine and Starfucked, both more fetishmodels than real gothmodels, but with a strong connection to the dark subculture because of their special appeal which finds favour with many people in the gothic scene. So, what are we speaking of here? Purely clothes? Well – not really. Although I have to make sure all of you guys do understand, that as well as not every fetishgirl is a gothgirl, not every fetish/gothgirl is a member of the BDSM-community or participant in that lifestyle, there too is a bit of an overlap, somewhat connected to a certain way of dressing and also sexual behaviour, so we will speak about BDSM a little in those respects.

As we already discussed, the gothic culture has always been open minded and very confident, regarding sexuality, fetishes and sexual extravagance, which might result from the early rebellious days of this subculture and the general feeling of being a society outcast anyway. From the getgo, this movement was a melting pot of different influences, socially unacceptable practices and very proud of being unconventional, “different”, open minded and “strange to others”. Freedom of expression and self realization mixed together with a strong sense for alternative aesthetics and “shocking” visuals. To provoke and to offend was one of the general goals, ideally within the exertion of personal preferences and fitting “dark”, “forbidden” pleasures. We talked about the color black – and what it stands for in cultural perception, and the gothic lifestyle was always a black one (and we talked about the reasons for this). It is no coincidence, that the BDSM-movement also chose black as the primary color of their ideology and the prefered way to dress: The mysterious, sinister but auspicious appeal of this color, is a representation of the unknown, unintelligible but tempting aspects of desires, sexual pleasure, the human soul and the duality of pain, which can’t be understood or is denied by many. Pain, an important element in the BDSM ideology, and even more the connection between pain and lust, the controversy of submitting oneself or controling others, the sensation of being degraded but taken care of, or the feeling of power of dealing either physical or psychic pain, are all very controversial and difficult to understand aspects of this mindset. It is this mysterious contradiction, as well as the tempting and taboo-like nature of this sexual freedom, the will to be different and a similar sense for aesthetic which brought these two lifestyles together and made the borders so fluent. Not the only reasons of course, for example, there seems indeed to be a bigger amount of BDSM-oriented folks in the standard gothic culture than in “normal society”, or at least people with a slightly bigger tendency to have fun participating in these sexual practices, which might have something to do with psychological assessments, or just the general open mindedness of the dark scene. So, enough of that, like I said, there will be special content regarding BDSM, bimbos and gimbos in the future – so let’s deal with the style and what is suitable for gimbos, at least, that’s what we are here for today.

The close connection to the fetish culture assures one thing: The most used material here is latex or patent leather, rubber, leather or PVC. Latex – most often skin-tight, black and shiny in combination with corsets, knee-high, high heeled stiletto boots and bondage-pieces, usually in the form of a sealed, tight cat- or body-suit. Of course, there are MANY other pieces and outfits made of these materials, like garterbelts, puffy miniskirts, tight pencilskirts, dresses, stockings, panties, bras and so on and so on, but the beforementioned bodysuits are especially en vougue in the fetish scene. This might have something to do with certain features of these materials and the nature of full-body-covering suits: The distinct feel of latex is something many people in the fetish culture favour, especially if it covers erogenous zones or the full body. The tight fit of a closed catsuit made of latex is likewise confining, narrowing and pressuring, an effect well known to create positive feelings in many mammals and absolutely able to create sexual arousal (which is why of course bondage and bondage-fashion are also very hip in these circles!). Another major benefit, and most certainly one of the main reasons why so many fetish models favor this type of dressing is the fact, that skin-tight latex body suits do emphasize a well shaped body like nothing else! Latex behaves like a second skin, highlights every curve and underlines a slim, well trained body underneath a plastic-like, artificial, smooth and shiny skin with a perfect, flawless surface. This is of course a special reason for bimbos and gimbos to wear such pieces, because it supersedes flawed, natural skin with an artificial, immaculate material. Like I said, there are many other different items to be found in the wardrobe of a dedicated fetish model – and many of them are very suitable for gimbos and also bimbos, like the high stiletto boots or even high heeled overknee boots, corsets, short skirts and dresses and stockings, so there isn’t really a big need for differentiation if you keep the basic bimbo/gimbo styling rules in mind (which ALL apply here still!), although the latex bodysuit might contradict with the “only dresses and skirts-rule” – something we will talk about now:

Before we come to the styling rules for fetish-gimbos, let me express my major complaint regarding this sub-style: Fetish-girls tend to be fetish-girls ONLY! This is a huge problem and absolutely NOT compatible with the bimbo- and gimbo idea! If you have a look at different sexy goth-models, you will discover, that most of the times, these girls are very versatile and adaptable, like it should be, wearing different sexy styles, from different goth substyles, exactly like many bimbo dolls, who change their style depending on different factors from “baby bimbo girl” to “high class escort”, although usually there is an emphasis on at least one of these archetypes (which we talk about in my special lessons for my Patreon supporters). Most fetish girls are evidently not willing or not able to do that. The beforementioned models Starfucked and Dani Divine are pretty good examples for this: While they are absolute rolemodels when it comes to the idea and style of fetish-gimbos (considering the problems with this I mentioned here…) they are very limited in their style. I had to search extensively to find pictures of both of them WITHOUT any latex- or fetishwear! A real gimbo doll knows ALL benefits of each of these substyles and is able to jump back and forth between those without limits even though there might be a certain preference. A gimbo (and bimbos too) may absolutely possess and wear items of this substyle (like, for example, beforementioned latex catsuits), but is NEVER limited to them. Don’t be a “fetish model” only – be a gimbo, which means variety and versatility! Now let us look at some of the important styling rules for gimbos who want to use the merits of the fetish-goth-substyle: